* Latest update: March 25th, 2017 - Added examples on how to use Lambda Environment Variables

First off, I have to say I am a big fan of AWS Lambda. AWS Lambda is a service that allows you to upload code to the cloud and run it without you maintaining any servers at all (a.k.a. ‘serverless’ architecture). You pay for the number of executions of your code as well as consumed resources, such as memory and compute time per execution.

AWS Lambda has allowed me to quickly build many application components. I just write my code, test it and hook it up to a trigger, such as an HTTP endpoint created using API Gateway. S3 or CloudWatch Events are also great ways to trigger Lambda functions. When I have to write new application code, AWS Lambda is becoming my preferred option.

That being said, I’ve experienced some challenges when trying to move my code across stages (or environments, however you want to call them). You know, you write your code in a development stage, once it looks good move it to a place where you can test it properly, and when it’s ready for prime-time, move it to your Production environment.

How can I keep configuration and application logic separate when I move my AWS Lambda function code across stages?

Imagine a Lambda function that fetches a file from S3, does some processing and when it’s done publishes a message to an SNS topic. In this scenario I should have separate S3 buckets and SNS topics in my DEV, TEST and PROD stages (I shouldn’t place test files in Production buckets or send test messages to Production topics, right?) Also, when I move my Lambda function from DEV to TEST and from TEST to PROD, I should not change any code in it; I should only change configuration.

In the server world this problem is often tackled using environment variables or configuration files stored in the local file system. But in the AWS Lambda serverless world, we only have functions and not a typical server environment. We have, thankfully, function versions and aliases…

A version in AWS Lambda is essentially a snapshot of your application code. Once you write your function and test it, you can publish a version. When you publish a version, you cannot make changes to that particular version and it is assigned a sequential number (1,2,3, etc.). AWS Lambda automatically names the working version of your code as $LATEST. 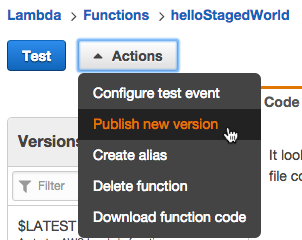 For example, the invoked function ARN for my DEV alias would be:

… and it can be accessed using the context object:

So now I have versions, aliases and a way to access them in my function code. Since my function code knows which stage it is running in, the only thing I need is somewhere outside my function where I can put configuration values that vary according to the stage.

In this post I explore four ways of storing configuration and their price and performance:

Once configured, Environment Variables are bound to a particular version of your function ($LATEST, 1, 2, 3, etc.) and are immutable.

Once I move this version through my different stages (DEV -> TEST -> PROD), the values for these environment variables will remain the same. The way Environment Variables work means that my immutable variable s3bucket=mylatestbucket will be carried over to DEV, TEST and PROD, which it’s not desirable. In other words, I don’t want to end up with my PROD stage having s3bucket=mylatestbucket, I want PROD to have s3bucket=myprodbucket.

That’s why I have to create one environment variable per stage and have a way to link the variable to that particular stage. Something like this:

This can be a problem if you have many variables and many stages. The ideal situation would be if AWS Lambda allowed us to link Environment Variables to Stages, not Versions. 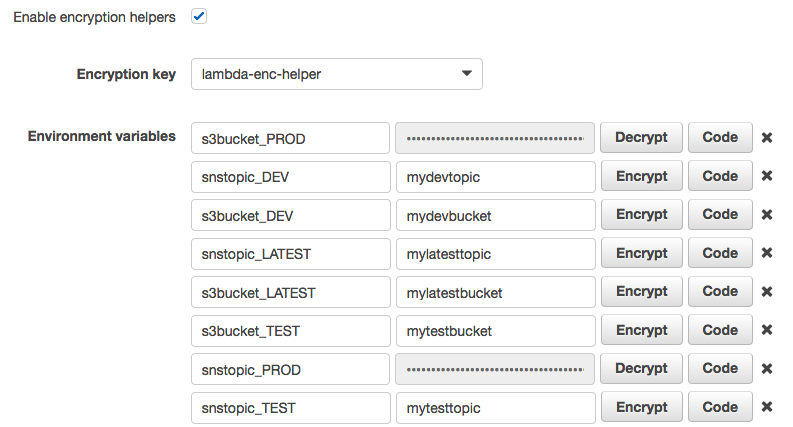 Here is some sample code:

For this solution we create a bucket that stores the application’s configuration and create one folder per stage: $LATEST, DEV, TEST, PROD. 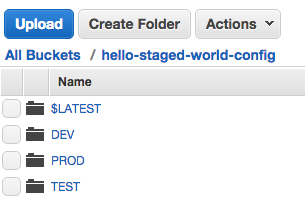 Why a $LATEST stage? You would typically point to DEV resources in the $LATEST stage, but it’s good to have the flexibility to point to other resources when you’re building a function. In some orgs, DEV resources are shared by developers and you don’t want to break other people’s work by tinkering with shared DEV configurations.

Now the next step is to create one config file per stage. For example, I create a file called env-config.json in the $LATEST folder of my config bucket, with the following entries:

I make sure this config file has the same name in all stages (in this example, env-config.json). The values in it will change according to which stage we are accessing (DEV, TEST, PROD)

We then implement code that accesses the invoked function alias (using context.invokedFunctionArn) and based on the alias value the function knows the location of the config file to fetch from S3.

This is similar to Option 1, but instead of storing config values in S3 we do it in DynamoDB.

First we create a DynamoDB table. I am creating a table named lambda-config with a hash key named stage. I am assigning 5 read capacity units and 1 write capacity unit (since I won’t be writing to this table often). Using the AWS CLI I can create my table using the following command:

Now I will insert my config values to this table.

I should see something like this in the Dynamo DB console:

For this solution we create a deployment package and store a configuration file in it. I created the following folder structure:

Under config, I placed a JSON configuration file (env-config.json) with the following entries:

The main difference is that here a single file contains entries for all stages, as opposed to having one separate file per stage and storing these files in S3. If you need to store API keys or credentials for an external service then it’s definitely NOT a good solution to expose your PROD API keys in a file that can be accessed by any developer in the DEV stage (or to expose credentials anywhere in a code repository!) 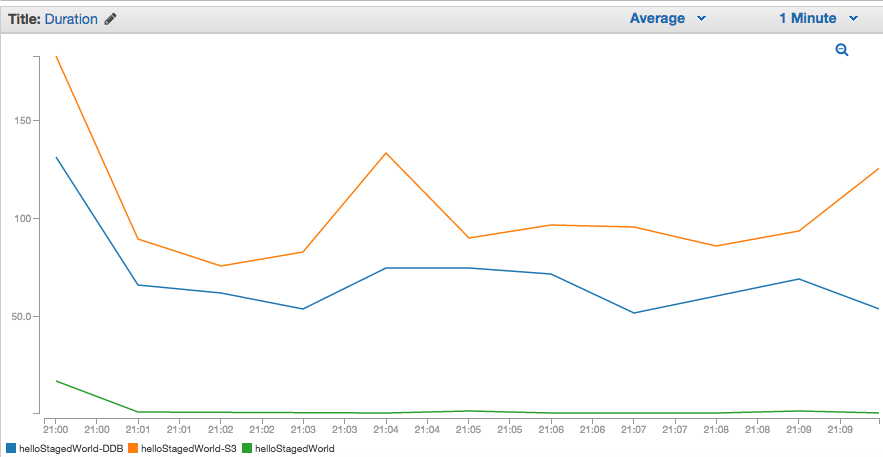 Using Matthew Fuller’s Lambda calculator, I did a bit of number crunching:

With AWS Lambda you get 1 million free executions per month, even after 1 year. 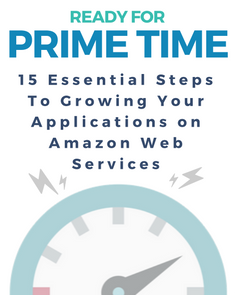 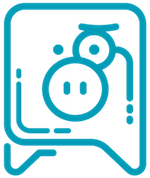